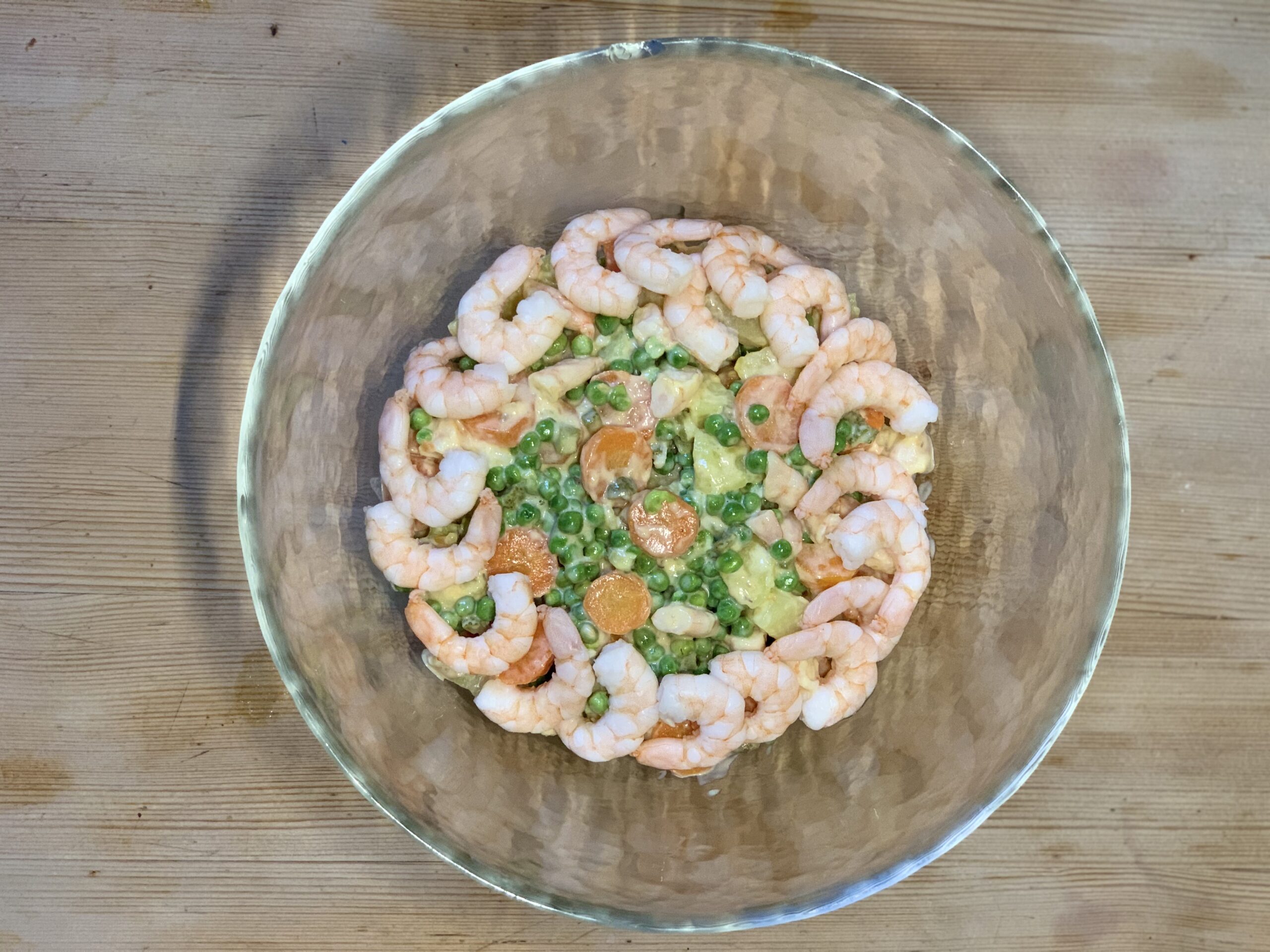 A salad of diced vegetables, seafood and mayonnaise

We sit at the table, waiting for our friend, Gianni Bellocchio.

The singer Zucchero is growling “You got me hurtin’ so bad, so bad I got to have it, so bad” out of the television set in the corner. It is too early for this, but since the man looks like Peter, I give him a free pass.

Black and white photographs of floods and snow on the beach cover the walls as a nod to harder times, but today the sun shines through the open door.

A little boy at the table next to ours pulls the chord on his toy shark and its jaws snap at his grandmother’s focaccia.  “Basta, Danilo,” she laughs. His grandfather surrenders his own brioche to the animal, until guts of apricot jam trickle down its teeth.

The barista Eugenio bangs the portafilter twice against the counter with two dull thuds. Metal locks, machine hammers, milk steams – it’s all music to my ears.

A group of men straggle into the bar and greet Eugenio, who does not miss a beat. Cups crash onto saucers fast, the room breaks into dialect, and Zucchero no longer has a chance. I can hear French in their nasal vowels amidst the cacaphony.

Gianni appears and the decibels rise. “Alloooora?” they shout.

He waves, and on the way over to our table, exchanges a few words with the grandparents.

“I am only drinking camomile tea today,” he promises us.

“Yesterday we had insalata russa, ravioli, and capon for lunch.” he says.

The grandfather leans over to our table. “We also ate insalata russa. We’ve got to have it, once a year!”

The grandfather pretends to be shocked and shakes his finger at him. “I want to see you in my studio after the Epiphany!”

Gianni turns to us and shakes his head. “That is Riccardo Varsi, my nutritionist. Whenever I go see him, we end up discussing where to go out and eat.”

We have not missed a single Christmas in Levanto since I visited it for the first time back in 1988, but as the pandemic rages on, it is clear that we should stay put in Zurich this year.

A few weeks ago, I chuckled over a food article that the renowned chef Giorgio Locatelli had written for The Guardian newspaper.

“In middle-class northern Italy, where I grew up in the 1960s and early 70s, there were two things you could not have Christmas without: smoked salmon and insalata russa. As an adult, I made Russian salad every year when I cooked, and sometimes when we went to the grandparents I would take it – because you have to have Russian salad on Christmas Day.”

Men in particular seem to love this dish.  Whenever I have asked a Levantese male what he ate for Christmas, he lists the courses, rattling off the usual suspects, but his tongue slows down to enunciate in-sa-la-ta ru-ssa, as if remembering some guilty pleasure.

In the 19th century, the Belgian chef Lucien Olivier invented it for his restaurant in Moscow, and the rest of Europe has been adapting it ever since. The Spaniards fold tuna into their versions for tapas, while the Russians favor ham. Locatelli makes his with only vegetables, and serves it with smoked salmon on the side. This is fine, but I prefer Marcella Hazan’s copious addition of shrimp.

On Christmas Eve, I will pull a bowl of this out of the fridge and serve it with baguette and prosecco. There will be clementines and dark chocolate for dessert. Nothing else, but a toast to your health.

Insalata Russa, inspired by the recipes of Giorgio Locatelli and Marcella Hazan

Serves 4 as a main course, six as a starter

The easiest way to do this is with an immersion blender in a narrow beaker. I wept with joy when Kenji Lopez-Alt’s youtube version worked on the first try.

Note: Pay heed when he warns you that olive oil will make it taste bitter. As author of the highly successful book The Food Lab, he knows what he is talking about. Because I wanted the flavor of olive oil, I made his mayonnaise with three quarters of a cup of sunflower oil. It came together perfectly, and then I stirred ¼ of a cup of mild olive oil in by hand just for taste. However, if your olive oil is strong, only add one tablespoon, as it can be overpowering.

Boil the potatoes in their skins. I cook the carrots in the same pan and remove each vegetable once it is tender but still firm, then rinse it briefly in cool water.

Peel the potatoes, dice them into 1cm cubes and put them into a medium serving bowl. Next, dice the carrots and toss into the bowl.

Pour boiling water over the frozen peas in a colander, shake off excess water, then add to the other vegetables.

Cut half of the shrimp into small pieces, and add to the bowl.

Add the diced eggs, if using, then the cornichon pickles and capers. Stir the mayonnaise into the salad, binding everything together.

Cover the salad and chill for at least 1 hour or overnight to allow the flavors to come together. Taste. Add salt if needed. A few teaspoons of the cornichon juice will pack a welcome, acidic punch. Lemon juice can be too harsh. Place the rest of the shrimp over the top of the salad for decoration, allow to come to room temperature, then serve.